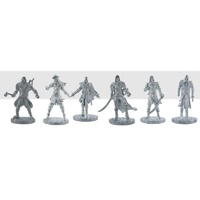 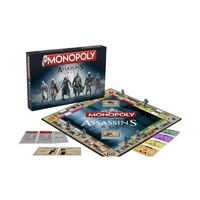 Sorry, this product is now retired.

Never fear! We do have over 10,000 items available to order now. Scroll down for more products from this category or use our menu at the top to browse our full range.

You can play as Altair, Ezio, Connor Kenway, his grandfather Edward Kenway, Aveline, or the protagonist of the upcoming Assassin's Creed Unity, Arno Dorian.
Other game pieces will also be changed to match the Assassin's Creed theme.

Money will be changed into Abstergo credits, and the usual real estate will be swapped out for historical locations featured in the series. Abstergo Industries and Abstergo Entertainment will replace the game’s original prime properties, Boardwalk and Park Place.

Suitable for two to six players, ages 8 to adult.

Monopoly and all related characters are trademarks of Hasbro and used under license.